I have received series of awesome books and one of which is The Skin Map by Stephen Lawhead. I did not realize that this book was released as a movie last September 2010. Anyway, here’s my book review on The Skin Map. 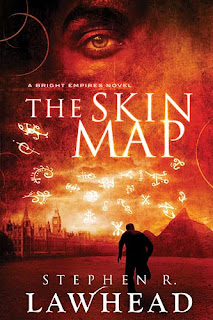 Kit Livingstone is on his way to his girlfriend’s house when he got lost in a place that’s utterly familiar but not at the same time. He lost his cellphone signal and the weather turns from bright sunny day to thunderous stormy day. Then an old man named Cosimo approaches him claiming to be his great grandfather and goes on about some theory that the world has multiple dimensions and alternate realities which he calls leylines; it was more than what’s required for Kit to think that the old man is insane. Insane or  not, Kit obliged to jump with the oldman and found a life far different from what he was used to. He then was thrown into different adventures one could never think of going to. He must find the Skin Map at all costs, but it won’t be easy – for others share the same goal.
This is the first book I have ever read by Stephen Lawhead. I didn’t really know much about him, but I’m happy I decided to read one of his books. It was well written, and pulled me right in at the beginning instead of waiting a hundred pages. I am a huge fan of sci-fi and I fell with every lines of the book. My only complaint is that I think the ending was a bit unclear and some issues were unresolved.
I do want to watch the movie and see how it compares with the book.

Over all, I must say it’s worth reading! Go buy one now!