I’ve received a disturbing photo of a signage that’s apparently posted at Greenbelt. 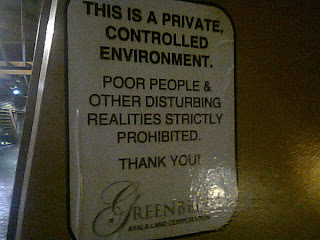 
Could someone correct  their sentence construction if they meant something else because this statement DOES NOT CONFORM TO ME OR TO ANYONE ELSE.


According to some, this might be a fake. I really hope it is because the sign’s very disturbing.

ON THE FAKE GREENBELT SIGNAGE

by Ayala Malls on Thursday, March 24, 2011 at 3:57pm
This is regarding the alleged signage that has been posted today, 24 March 2011, at the Greenbelt mall, a photo of which has been circulating online. This signage is not authorized and is not part of Greenbelt’s official mall signage.

The Ayala Malls Management does not tolerate such pranks and is currently investigating the matter. We shall be coordinating with the proper authorities for corresponding actions to be taken.

We would like to reassure everyone that Greenbelt is for the enjoyment of the public and the community it serves.


What do you think?