When Peaches turned 3, I introduced her to Lego and other building blocks but like most of her toys, she used them for a day or two and never touched them again. I guess because when the pieces were formed, she didn’t want to play with them anymore because they’re too small and for her it meant, it’s for display more than playing with it.

She then saw on Cartoon Network, the Pinypon shopping center and instantly fell in love with it. I knew it was a bit expensive but by this time I knew she can take care of the toys and so we got her the shopping center and then we were slowly building the entire Pinypon town!

If not for Cartoon Network we wouldn’t have known about Pinypons. I found out that the Pinypon are famous in the 70s and 80s and in 2009, they relaunched their new toys.

What WE Love About Pinypon Toys

1. The characters are not too small nor too big for little hands to maneuver comfortably. The dresses, accessories & hairs can be interchange amongst characters and the child can easily create new characters she wants.

2. The colors are really nice and pretty that any child would love it. It has been with us for over a year and the colors didn’t fade even when Peaches brought few characters and toys to play with at the swimming pool.

3. It’s a whole town and when collected, can be played all together. Great when my daughter’s friends come over for playdates! It’s a big hit.

4. Teaches my child to take care of something that she really love. I can truly see that she’s careful with her Pinypon toys especially the accessories since some of them can be really tiny like apples in the apple store, candies from the shopping center, pieces of snack items from the picnic basket and so on.

5. So stylish and gives the kid a lot of room to use her imagination to create and style new characters. 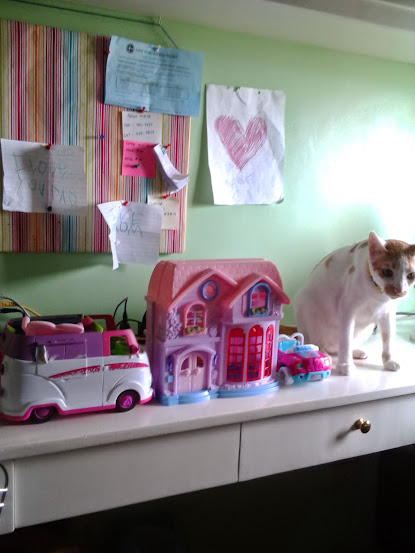 toy in the middle is NOT Pinypon

We’re saving up for the rest of the Pinypon set- Hotel, Caravan (pictured above) & swimming pool (which was only being mentioned by Peaches but I couldn’t find it on the Pinypon website yet).

Pinypon in the Philippines can be bought in Toys R Us branches. I haven’t checked Toy Kingdom yet but I’ll update this post once I have other details. The Pinypon Shopping center costs P2,000-P2,500 (I totally forgot!). The Pinypon houses are around P350-600 depending on the design because there are Pinypon houses that are just that, a plain house and a character, the others are intricate like it’s a coffeeshop, a pastry shop or an apple store, etc.

Pinypon in Manila can also be bought from SM Department stores!

Pinypon in the US are sold in Toys R Us retailers & Target.

I hope this post has helped you get to know a bit more about the Pinypon! My daughter loves every bit of it!

***Pinay Mompreneur was not paid in whatever form when this review was written.