Troy’s accountant gave us a bag full of kamias yesterday. Kamias is a sister fruit of starfruit and it’s sour. It is usually eaten with rock salt. And yes it does bring childhood memories 🙂


In English , Kamias is called Tree Cucumber or Cucumber tree. In Malaysia, it is called belimbing asam; in Indonesia, it is belimbing besu; in Thailand, it is taling pling, or kaling pring. To the French it is carambolier bilimbi, or cornichon des Indes. Filipinos generally call it kamias but there are about a dozen other native names. 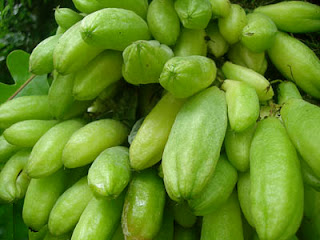 Anyway, I was having fried Bangus for dinner yesterday so I had this brilliant idea:


I boiled the kamias and then mashed it. I mixed it with Bagoong and paired it with the fried fish. It was delish!!! I know there are more to Kamias than rock salt and Bagoong but I was really happy to have eaten it after so many years 🙂